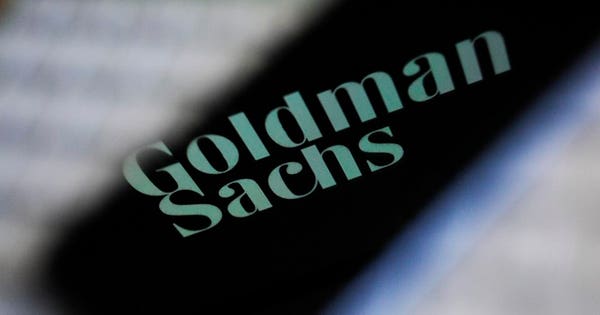 The Goldman Sachs bank logo is seen reflected on the screen of a mobile phone. (Photo by Jaap Arriens/NurPhoto via Getty Images)

The bitcoin price, which has been wallowing around the $7,000 mark since a sell-off last week, could be in for a boost after it was reported New York banking giant Goldman Sachs is mulling whether to get stuck into crypto.

Goldman Sachs is considering holding bitcoin and cryptocurrency securities on behalf of funds, according to a Bloomberg report.

“In response to client interest in various digital products we are exploring how best to serve them in this space,” a spokesman for Goldman Sachs told Bloomberg. “At this point we have not reached a conclusion on the scope of our digital asset offering.”

If Goldman holds the securities on behalf of the funds it would reduce the risk for clients — one of the biggest barriers to entry for potential bitcoin and cryptocurrency investors.

Many have been looking forward to positive bitcoin and cryptocurrency news coming out of Goldman Sachs after the appointment of David Solomon as the bank’s new chief executive.

Solomon said in June that the bank is looking into adding further bitcoin and cryptocurrency services to its portfolio.

After being pushed up at the beginning of last month, the bitcoin price fell sharply back.

Goldman’s move, if it does choose to offer custody for crypto funds, will see it go head-to-head with Japan’s Nomura, Bank of New York Mellon, JPMorgan Chase, and Northern Trust — all of whom are thought to be working on or exploring custody offerings.

The news is the latest in a raft of reports that institutional money is gearing up to get into bitcoin and cryptocurrency and could provide further support for the upcoming Securities and Exchange Commission’s (SEC) bitcoin exchange-traded fund (ETF) decision, which could come as soon as this month.

Last week it was revealed that U.S. coffee chain Starbucks is keen on getting its customers to use bitcoin and cryptocurrency and has teamed up with the New York Stock Exchange owner Intercontinental Exchange (ICE), software giant Microsoft and Boston Consulting Group to launch a digital platform called Bakkt.