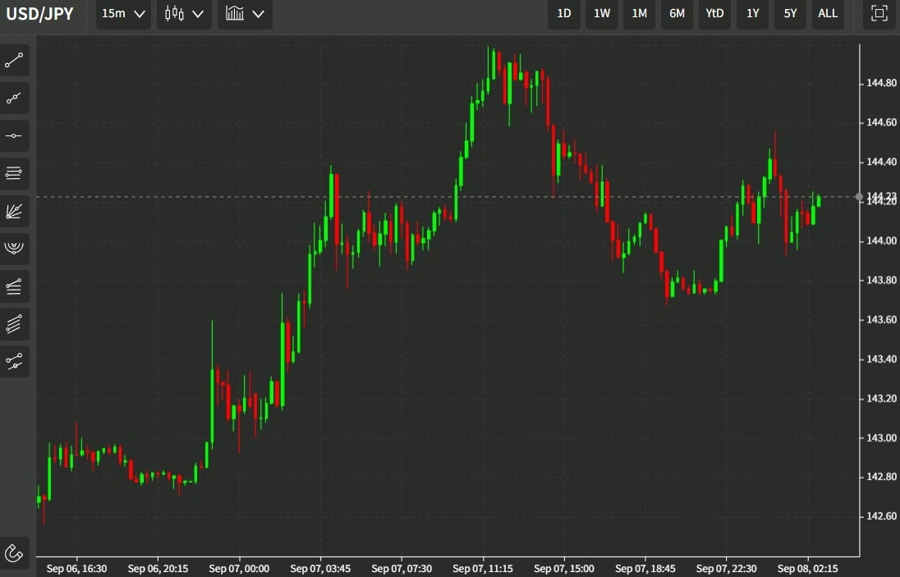 USD/JPY
moved higher in very early trade from lows around 143.75 to
(briefly) above 144.50 before falling back to dip under 144.00 and
then stabilise (as I update). I posted early in the session on the
barrier defence ahead of 145.00 (in the bullet points, above), watch
this ahead.

There
were no official statements out of Japan today.

AUD,
NZD, GBP, CAD all traded back a little against the USD, but the
ranges were not large.

EUR/USD
drifted a little lower but its pending fresh input from the European
Central Bank monetary policy announcement and Lagarde’s news
conference coming later today. There are previews in the points
above.

The
notable data on the session was Australia’s July trade balance. The
surplus pretty much halved in the month, a big negative surprise.
Exports slumped 10% m/m. Iron ore (-15% m/m), coal (-17%), and tourist
departures for overseas travel were cited as major contributing
factors. Imports continued to recover.

The
People’s Bank of China took some succour from the touch of softness
for the USD in Wednesday trade, setting the USD/CNY reference rate
just over 6.91. A breather for the Bank. Its not unhappy with the
weaker yuan but would like to slow the pace of decline to dilute the
risk of capital flight from the country.