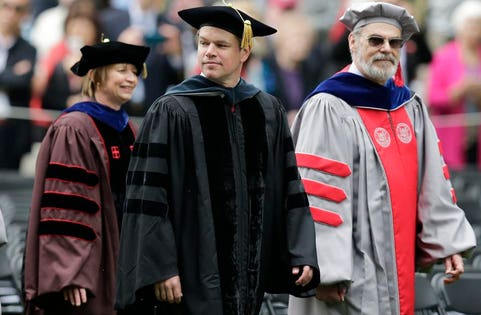 When it comes to high-end U.S. real estate, there’s no shortage of skeptics who warn of nosebleed valuations and slim pickings of obvious bargains. And they’re probably right. Yet the two big money investors who capitalized on the buys that abounded after the financial crisis, Brookfield Asset Management and Blackstone Group, continue to churn out notable deals across the country.

Blackstone, a manager of $119 billion in real estate assets, is likely to add Lasalle Hotel Properties, the owner of 41 high-end hotels in seven states including New York’s Park Central and Boston’s Liberty Hotel, to its coffers. In June, it offered nearly $5 billion to take the company private, outmaneuvering a hotel REIT called Pebblebrook. Brookfield, which counts $159 billion in real estate assets under management, is on track to privatize mall operator GGP at an about $15 billion valuation by Labor Day. And on Tuesday, it announced the $6.8 billion takeover of office and residential real estate operator Forest City, which has major presences in the New York, Boston, Washington, Denver, San Francisco and Richmond, Va. markets.

How do the top real estate investors of the crisis era reconcile now paying top dollar to keep their deals humming? In an expensive market, it appears there’s pockets of micro opportunity nationwide to keep the Blackstone’s and Brookfield’s of the world busy. For instance, a look through Forest City’s portfolio indicates Brookfield is making a calculated bet on a narrow set of high-end markets, led by the area surrounding the campus of the Massachusetts Institute of Technology.

Forest City’s single biggest asset when it comes to net operating income is what it calls ‘University Park at MIT.’ This development counts some 1.7 million square feet of gross lease-able land (GLA) across 27 acres (over 80% office) and 531 apartment units, all almost blending into the MIT campus. The portfolio is 100% leased at a rent-per-square-foot of $78.60, thus it generates about $100 million in annual net operating income.

It’s a staggering figure, but no surprise when one thinks of the plethora of global biotech and pharma giants who want to sidle up as closely as they possibly can to MIT’s research labs. Bull market or bear market, these properties are likely to thrive.

In 2015, Forest City CEO David LaRue bought out a partner, Health Care REIT, to take full control of the development for $573.5 million. The $76.80 PSF that University Park at MIT commands is generally lower than office rents in midtown Manhattan, where a looming supply glut is now causing rents to plateau. Yet there’s only one MIT and the premium paid to near campus is unlikely to to die down anytime soon. In Forest City, Brookfield may have identified a no brainer bet on MIT.

Other pieces of the Forest City portfolio are also compelling.

Brooklyn’s titanic 3.1m GLA Metrotech campus is close to two bridges connecting to Manhattan and most inter-borough subway lines, yet it commands $45.98 in rent PSF, less than half Forest City’s highest yielding asset, the 52-story New York Times Building, where rents are more than double.

Then there’s a big development opportunity.

‘The Yards’ in Washington D.C. is a 53-acre mixed use project near the Washington Nationals baseball park; when built it’s expected to hold 3,000 residential units and 1.8 million square feet of office space. To date, only a fraction’s been developed, meaning Brookfield has an organic growth opportunity. The same goes for an asset called “Stapleton,” a 4,700 acre development just outside of downtown Denver where Forest City had planned for a master planned community peaking in size at 30,000-plus residents, 14,000 homes, 3 million square feet of retail and 10 million square feet of office space. Of that, Forest City had completed 1,748 apartment units, per recent disclosures, and about 6 million GLA of mixed use space; it owns 466 acres of land (with a further 312 acres controlled via option) and is in the midst of building 515 apartments. In San Francisco, Forest City had begun developing Pier 70, a former shipyard, now turned to a 28-acre mixed use development with 3.2 million square feet of commercial space, and an a 295-unit apartment complex called 5M.

Prior to its sale, and at the urging of hedge fund activists, Forest City had improved its board and simplified its operations, allowing for a buyer to come in. It slimmed from managing eight property types to focusing exclusively on office and apartments, divesting 10 malls and a dozen shopping centers in New York. Forest City exited non-core JVs. What it kept was real estate in high-barrier-to-entry markets. As a buyer, Brookfield is betting on a few select markets like the MIT-area, the continued growth of downtown Brooklyn, supply-constrained San Francisco, Washington’s waterfront, Denver and Richmond.

At an enterprise value of $11.4 billion and an equity value of $6.8 billion, Forest City doesn’t come cheaply. But Brookfield’s $25.35 price is generally below analyst and investor estimates of net asset value, ranging from $28 to $31 a share.

When it comes to Blackstone, its hotel bet also seems to have a thesis that can counter broader real estate valuation concerns. Lasalle’s hotels are concentrated in places like New York, Chicago, San Diego and San Francisco where premium land is scarce, but hotel values have struggled amid a glut of supply and the threat of sharing networks like Airbnb. Like Brookfield’s Forest City buy and its other big recent deal for mall operator GGP, Lasalle’s shares languished on public markets until Blackstone came along. At an enterprise value of $4.8 billion (equity value $3.8 billion), Blackstone is taking control of 10,700 hotel rooms, mostly with terminable management contracts.

At the CNBC Delivering Alpha conference earlier in July, Blackstone president Jonathan Gray said he believes the U.S. economy is far stronger than many think. He even said there are incipient signs of inflation. As one would have it, hotels are considered by some to be a good inflation play — hotel rates reset almost nightly. In the past, when picking up large portfolios of real estate, Blackstone’s succeeded in recouping much of its equity cost by divesting some real estate assets, then earning strong returns holding onto core properties. With 41 premium hotels, Gray & Co. have plenty of canvas to work with.

Bottom Line: An expensive real estate market isn’t keeping the industry’s biggest players on the sidelines. Instead, Blackstone and Brookfield are narrowing their focus to high-growth geographies with big barriers to entry. Though it requires a ton of cash, it doesn’t take a braniac to bet on MIT.