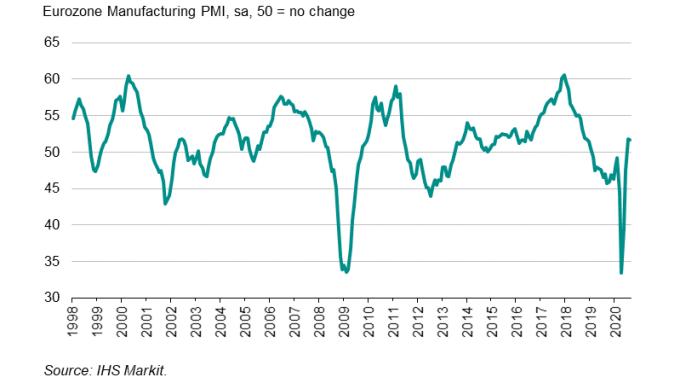 The preliminary release can be found here. This just confirms that factory activity held up somewhat in August across the euro area, keeping on the recovery path.

However, there are ongoing concerns surrounding domestic demand conditions and amid the hit to the services sector last month, it continues to allude to a considerable degree of uncertainty involving the virus situation in general.

We’ll have to see how things go in the coming months for a better idea on how the recovery is progressing within the region. Markit notes that:

“Eurozone factory output rose strongly again in
August, providing further encouraging evidence that
production will rebound sharply in the third quarter
after the collapse seen at the height of the COVID19 pandemic in the second quarter. Business
expectations for output in a year’s time also rose to
the highest for over two years as prospects
continued to brighten from the unprecedented
gloom seen earlier in 2020.

“Caution is warranted in assessing the likely
production trend, however, as so far it would have
been surprising to have seen anything other than a
rebound in output and sentiment. Worryingly, order
book growth cooled slightly in August, and there are
indications that firms are bracing for a near-term
weakening of demand.

“Of note, a key theme of the latest survey is one of
firms taking a cautious approach to costs and
spending, notably in respect to investment and
hiring, amid continued worries about the strength of
future demand and uncertainty over the course of
the pandemic. Producers of investment goods such
as plant and machinery reported the weakest order
book growth, and job losses remained amongst the
most prevalent since the global financial crisis.

“Whilst the drop in payroll numbers was led by
Germany, France, Spain and Austria reported a
reacceleration of job losses and a return to job
cutting was seen in Ireland, sending worrying
signals that many firms have become more
concerned about the near-term outlook.

“In short, manufacturing is currently being buoyed
by a wave of pent up demand, but capacity is being
scaled back. The next few months’ data will be allimportant in assessing the sustainability of the
upturn.”